We emerged out of the Chaos on The January 23, 1997, as the greyfaced would put it. But we now, that Chaos gave birth to us and we escaped order on the 23 Chaos, in Yold 3163. And the weekday we can't remember. Probably it was Pungenday, but our calendars, being electronic, contradict themselves in that matter.

Our purpose is to bring disorder to the world of computing and vice versa. As clearly can be seen, computing has been to orderly and bureaucratic for too long time. If you ever have seen a Computer you'll know it. They all look the same. The same monitors, the same towers or desktops, the same Keyboards, the same mice, and all in the same colour. And further, how many different user-interfaces have you seen? They all look the same. Same windows, same borders, same menus. And their users even all run the same programs. Only the colour can be choosen. This obviously is a state of mishap.

There have been several efforts of bringing Chaos to Computing. There is for instance, this standard-thing. One had made thousands of different standards, in cables, plugs, processors, interfaces, operating systems, user interfaces, programming interfaces, programming languages, file standards (did you know there are at least 50 Standards for bitmap grafic files?) and even design! But where are they now? Gone. Eaten by the sharks of lawyers of one big greyface.

I think, therefore I'm in danger as being looked at as abnormal. Sorry, that was a philosophic glitch. I think we've made our points and aims clear, Now it's time to introduce ourselves. 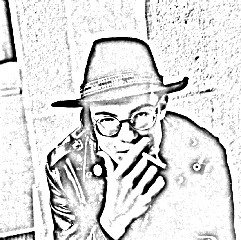 Kilopope Jonathan III, K.S.C and Episkopos of the DCC, smoking his Kallisti Gold. Of course, he does not "really" look like that, the jacket he wears is in fact black, and he is a bit more pale than this photocopy shows. Unfortunately you can't see that he's wearing a Bob-Button(tm) on the sleeve of his jacket, from our discordian offspring The Church of the Subgenius. So we have image enhanced this through computational meditation:

As we clearly can see, this obviously is a Bob-Button(tm).

We'd liked to have Jonathan for an interview, but he refused due too much work to do, creating homepages, fucking up unix-boxen and trying to get something to eat the next days, having spent his money on telephone-calls, hardware and Kallisti Gold.

The we headed for Prophet Sinad, but he most probably wasn't gardening at the very moment, since we didn't find him by his beloved plants. And so you have to wait as we do... Maybe you've got something to smoke.

For the confused, there is a FAQ